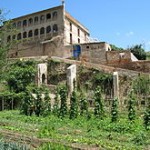 Kamiel saw this place on the outskirts of Barcelona in a documentary; definitely worth a visit as they might give us some insight in Spanish legal procedures (they fought eviction). Probably also a good place to find like minded people who want to move to the countryside.

Wiki: Can Masdeu (Catalan pronunciation: [ˈkam məzˈðew]) is a squatted[1] social centre, residence and community garden in the Collserola Park on the outskirts of Barcelona. A former leperhospital which had been abandoned for some 53 years before its eviction, the squat became famous in 2002, when squatters in lockons and on tripods nonviolently resisted the eviction. During a three-day standoff, police were unable to remove the squatters, resulting in the case returning to the courts. After three years, the case was won by the owners, but no eviction notice has since been issued.